Floodplain wetlands and discarded meandering river courses, locally known as Beels, constitute important inland fishery recourses in Assam. Beels offer vast potential for capture fishery, as these are auto-stocked with fish seeds from the rivers. Beels water are rich in nutrients and offer convenient environment for fish growth. In recent years, the inland fish production from the floodplain wetlands has been in the decline due to a number of natural and manmade environmental changes in the eco system. The major constraints are the recruitment failure due to poor water exchange with the parent river because of extensive flood control and irrigation works and the weed infestation. Thus, there is an urgent need to find out ways to optimize the yield from these wetlands without causing drastic changes in its eco-system. Fish culture in beels may be an alternative to increase fish production.

Fish culture in beels is a new concept and has been introduced very recently in Assam though fish seed release as a tool to increase fish production has been practiced in Indian reservoirs since 1982. Pen culture, Cage culture and fish seed stocking are a few methods of fish culture in beels.

Pen culture is practiced in beels either to raise fish seeds or to produce table fish. Site selection is very important for pen culture. Selected site should be with gradual slope and water depth of 1 to 2 meters. Locally available materials can be used for pen construction. Spilt bamboo sticks woven with coir/nylon ropes (Locally called Bana) are used to cordon off marginal beel area. The bamboo banas are supported by vertical stacking poles (bamboo or wooden) fixed at 1 to 2 meters intervals. Thick polythene netting supported by bamboo /wooden poles can be used for construction of pens. Small sized pens (100 – 400 m2) are easy for handling but in large pens (500-1000 m2) fish grow quickly. Weeds, Carnivores and weed fish should be removed from the pen area and depending on the soil and water quality fertilizers need to be used. Pens should be stocked in the ratio with surface, column and bottom feeders in the ratio of 3:2:1 with 5-6 cm sized fry for rearing up to fingerlings and 8-10 cm fingerlings to produce table fish. Recommended stocking density is 20,000 to 30,000 fry/Ha for rearing up to fingerlings and 8,000 to 10,000 fingerlings/Ha to produce table fish. Some farmers are found to rear upto 2-3 lakhs fry/Ha upto fingerlings stage. The fry and fingerlings should be fed daily with supplementary feeding at the rate of 5% of their body weight. Pen culture can be done throughout the year but winter season should preferably be avoided due to slow growth of fish.

Many farmers in beels at Nagaon and Morigaon districts have now adopted pen culture technology.

The CICFRI have introduced cage culture technology in Assam. Like pen culture, this technology is used either to raise fry upto fingerlings or fingerlings to table fish. Air breeding fish are more useful to produce table fish in cage. Cage culture can be done in flood affected as well as in weed-infested beels. Another advantage of cage culture is that same cage can be used two to three years.

Cage can be made from readily available nylon net and can be placed in series with floaters. It has been observed that 6 M x 3 M x 1.50 M cages are handy and easy to manage. In such a cage 550 to 750 fry (3-4 lakhs/Ha) can be reared up to fingerlings stage . Supplementary feeding in the form of MOC and Rice bran in the ratio of 1:1 should be given at the rate of 4-5% of body weight of the fish. Supplementary feed should preferably be given in earthen tray to avoid loss of feed.

Cage culture, inspite of big scope, is not yet popular in Assam.

All beels are not suitable for fish seed stocking. Oxbow shaped beels and the beels with high banks with one or two easily manageable connecting channel should be selected for stocking.

Adequate numbers of large sized fingerlings may not be available at beel site. It will also be difficult task to transport large numbers of advanced fingerlings to beels from the fish seed farms. Thus, fish rearing in pens and cage may be an alternative.

Beels in Assam are flood prone. Flood starts normally in June to August. Therefore, fish seed should be released in the later part of August. Fisherman generally erects bamboo banas at the connecting channel during this period for bana fishing. This will also prevent escaping of released fingerlings.

Beels are priceless gems on earth. In spite of plenty of high fishery potential beels, Assam is not yet self sufficient in fish production. If the beels are properly developed and used, no doubt Assam will be fishfull. 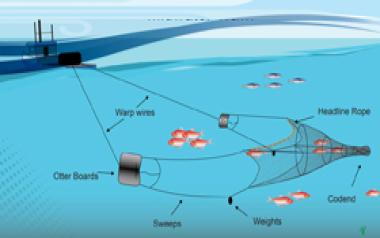